Seekers make up my closest friends.
Those who never seem to be relieved.

I am perhaps one.
Sure to claim no relief, but much to overcome.

There are parts of me that can’t wait to learn and grow.
Others feel the weight of the wide world and get stuck.
I’m on the outer-edges.

Some among my friends,
seem to have hit something like gold.
With no fear: true.

It isn’t that I’m afraid of being true, just that there won’t be a
single friend left after I’m through with the true. 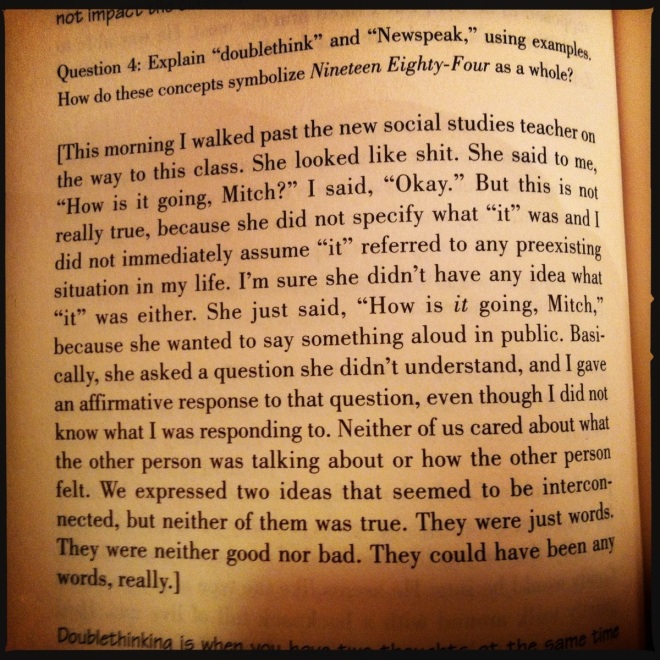 Many of my friends
hate superfluous hellos.
Grumpy silent types.

I am the particular mood in which time slows just enough to become almost unbearable. Moods like moths, unwanted and only bothersome because of their unpredictability and JERKIness. Not as in jerk like the noun, but more like jerk like the verb. Recently, I was told in an email that I was “dicking” like the verb.

There are patience everywhere. Yes I know that is spelled “wrong”. I wish I were impossibly, grammatically perfect so that everyone could assume that I was hilarious. Patients, a virtue.

I live in a house with often one and sometimes two additional males AND often and occasionally, one or two females. Roommates are strange like whispering cats. I think maybe that only happens in my head.

I feel tired like walking in jell-o tubs and very sleepy children hitting my “core” with wooden mallets, sort of softly but sustaining. Also, hangover, no headache.

Bright and the ideal are sometimes lost on those who steer. Also stir. Like toss and turn stir, not like mix these chocolate chips into this dough stir.

My friends are good people. I wish I could keep them. I am however, very aware that friendship, at least thus far in my time, is a relative, geographical, proximity-related endeavor. Time tested as they may be, distance has made bland even the most fiery of my relationships. Fiery? Really? Is there fear of confusion?

Foods and drinks and friends
and musics and dances and
more foods. Love: birthdays.

Like Loading...
Despite the Sickness Found by One of Our Compatriots, the Night Was Found With Arms Raised High In Stupored Joy As Well As Filled Spaces

Lemonadey night
The truth in our boringness
Apparent friends, drinks.

In the audience,
Josh Bryant is sitting with
a glass eyed stranger.

I am wondering,
“Who would come to FJO,
with JB on break?”